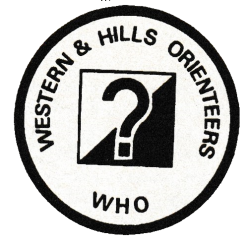 From The Australian Orienteer 6/1990.

WHO indeed you may well ask!

I'm here to tell you WHO. That’s not UHOO but WHO — Western and Hills Orienteers, from the ‘hills’ in Sydney's west. If you are an orienteer from NS W you should be familiar with the WHO logo and double-blue colours. NSW Orienteering meetings often ring to the sound of WHO input from such stalwarts as Owen Sharpe or Bruce Cooper. So for the beneﬁt of those who don't know WHO, I’ll ﬁll you in; after all you should want to know more about the club that will be staging the (National) 3-day Great Western Challenge OKat Cowra, in June 1991.

Western and Hills is a relatively young club by Australian and World standards. In 1983 a group of orienteers living to the west of Sydney, and belonging to clubs spread throughout the Sydney region (such as Garingal and Kareelah) thought it was time to start an orienteering club in their own area. At the first meeting in June, held at Parramatta, 10 enthusiasts formed the Hills and Western Orienteering club electing Peter Stevens as President. Steve Dunlop produced the ﬁrst map for the club, a black-and- white map of Parramatta Park. This was used in the club’s first event in November 1983.

By 1984, membership had risen to 26, and the Club’s logo and ofﬁcial name became Western and Hills Orienteers (WHO) - who else??? The drawing area, approximately 25 kilometres from Sydney, was deﬁned to roughly extent to Ryde (east), Hornsby (north) and Warragamba Dam (south). A taste for administering major events was experienced when the Club jointly organised an OY 2-day Badge event (with NOSH) at The Boyd in October 1984 with Steve Dunlop as setter.

Since 1984 membership has grown slowly, and we are presently at our highest level of 35- a small club by some standards but luckily most members enjoy being involved in all aspects of this sport and consequently we have been able to achieve a lot in a small space of time. Being involved in the organisation of major OY events each year has developed the strengths within the club. From 1984 to 1987 WHO used maps belonging to other Clubs for OY events. For the State Champs in 1988, WHO engaged the services of Gareth Prosser to produce the map of ‘The Pinnacles’ at Newnes near Lithgow. Currently the club has five working maps. For the Great Western Challenge 1991 three new maps of the area centred at Wyangala Dam are being produced.

WHO is pleased to be a fore-runner with many innovations in NSW orienteering. Annual reports have been produced since 1986; an active publicity/promotions position has been held since 1987; a Club/Members championship has been contested since 1986; the State Championships were organised by WHO in 1988, only 5 years after the Club's inception; a ‘sister’ club contact, IBM Klubben, is in Sweden; the Club has prompted changes in the OY classes to accommodate a wider variety of entries and subsequent alteration of Club OY pointscores, and has made innovations in mapping — watch out for the Great Western Challenge maps!

The character of WHO is made up of its members so let‘s have a brief look at some of the characters. Original members (though not that old!) still competing for WHO in events are current President Bruce Cooper, and Hank van Oost. Bruce has orienteered since 1981 and involves himself in all aspects of orienteering. As he has a ‘passion’ for mapping, he was the Club’s mapping officer for many years, as well as being Secretary (2 years) and Newsletter Editor. He is also the OANSW Newsletter Editor in 1990. He was setter for the NSW Championships 1988, and Controller of the Central Highlands Championships 2-day event at Newnes in September 1990. Now, as Chairman of the Steering Committee for the 1991 Great Western Challenge. Bruce is extensively involved in planning for this national event.

Hank is co-organiser for the 1991 event; he was Day 2 Setter for the 1990 Central Highlands Championships at Newnes and was one of the Club’s delegates to the OANSW meetings in 1989.

Owen Sharpe joined WHO in 1984 and does not seem to have stopped creating and working for the Club since then! His work is evidenced by our Club logo (his creation), our name (prompted the mnemonic WHO). our colours, our Club ﬂag (visible at many major NSW events) and our own Club Championships point score system. He has made the Club’s annual trophies for a number of years. Decision-making and ideas have been his forte as Treasurer (1985, 1986), President (1987,1988) and as a delegate to the OANSW since 1987. This year, he is our first member of the Board as Newsletter and Promotions Officer and he has been the OY Statistician for the past two years being particularly noted for his OY Point score tabulation.

Other members you may have encountered down the track include Gerry Wong (our man with the right equipment) whose electronic Wong-calator is well-used at OY events to calculate ﬁnish times, along with his Printing Clock. Steve Hure began competing in orienteering events in 1988 having successfully run in numerous fun-runs and the odd marathon. He is currently our Club Captain and has a hard job in following Wattsy‘s footsteps. Helen Watts (W21A) was Captain since 1987 and her Pizza-and-Bowling nights as well as Bushdance evenings kept the club moving on the social scene. Ray Robison (M35B) is co-organiser for the 1991 event; his initiation as an ‘organiser’ was at the 1988 State Championships. His expertise at promoting the sport was used in his capacity as WHO’s first Publicity Officer in 1988. Chris Crane is Secretary of WHO and Event Secretary for the 1991 event; he is probably training son Ashley, or daughter Adele, to take over either job at any stage. Barry Gill (M35B) is WHO’s money-man and is renowned for his stringent control on Club funds.

Ken Sinclair (M4OB) is editor for the WHO ‘Who‘s Talking’ newsletter, a bi-monthly 20-page or more, publication with news, views, results and gossip distributed to Club members. Articles submitted by WHO members are eligible for the keenly-contested annual ‘Bruce Cooper Trophy for Literary Excellence’. Erich Weber, who has orienteered in Switzerland’s Junior Squad (don’t ask him how long ago!) is experienced enough to have won NSW OY in M40B twice, and the 1990 NSW Night Champs. The Bakers (Pat, Peter and Dawn) invaded us from Pommie-land in 1988 and even though Paul arrived late, he has made up time with good performances in OY event. He is the Club‘s current mapping officer. Rowena Whittle is another frequent competitor at major events and currently is the Promotions Officer for WHO. This is by-no-means an exhaustive list of WHO participants; look out for our Club T-shirts at events.

Our Club colours are recognisable as light blue and dark blue; the WHO logo is a large question-mark (obviously the logo to have!) and WHO members are very friendly. We may not be elite orienteers or have a lot of achievements to our credit but we like to be social, and enjoy meeting fellow orienteers. We welcome all orienteers to come to the 1991 Great Western Challenge in June, at Lake Wyangala to see for yourselves just what this Club is capable of achieving.

We are confident it will ‘TAKE YOUR BREATH AWAY’!