The 5 Key Skills of orienteering 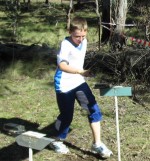 (aka The 5 Key Techniques)

When you can use these five techniques skillfully, you will be able to find any control on any orienteering map in the world. On some legs you may use only one technique, but for most legs you will need to combine several, or maybe all five, techniques. 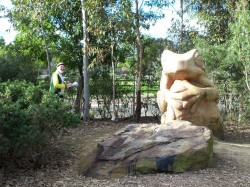 Before we get to the 5 key skills, here’s an insight into using compass bearings: Accuracy deteriorates as distance increases. Our compasses aren’t surveyors’ tools - any bearing you measure on the map will likely be off by one or two degrees. As you follow the bearing, you are likely to unconsciously veer off another degree or two. Sometimes these errors will offset each other and you’ll end up exactly on target. But at other times they will compound each other. Over a 100 meter leg, a 3o error will put you 5 meters off course. You will likely still be able to see your target. But over a 500 meter leg, the same error would put you over 25 meters off course. You might very well not be able to see the control. So use your compass wisely as you apply the 5 Key Skills: use it to orient your map, and use it to aim yourself in a general direction, but when you use it to try to pick a precise line to a specific point, keep the distance as short as possible.

Pick out a CATCHING FEATURE that will let you know if you’ve gone too far. When planning your route, look on the map a short distance beyond the control you are heading for, and pick out a big, distinct feature that you can’t fail to recognize. If you arrive at this catching feature, you will know you have overshot the control, and can turn around and go back. It will “catch” you and keep you from wandering too far past your control.

Follow a HANDRAIL. Even if it were pitch dark, you would be able to easily negotiate a winding staircase if you just put your hand on the handrail and followed where it led. Handrails in orienteering are features that are you can follow just as easily. Trails and roads are the most obvious, but you can follow fences, streams, ditches, the edges of fields, and other long, narrow features just as easily. Following a “handrail” takes much less concentration than following a compass bearing. Also, since the handrail is illustrated on the map and a compass bearing isn’t, following the handrail makes it much easier to keep track of exactly where you are.

When following a compass bearing to get to a distinct point near or on a handrail, try AIMING OFF. If you pick a compass bearing that aims directly at the precise point you are heading for, if you err even slightly you won’t know if the feature you want will be on your left or your right as you approach it. By deliberately aiming to one side of the feature, you can confidently predict which side it will appear on. This technique works best when the feature is on or very near a handrail - for example a boulder near a stream. If you aim right at the boulder, but don’t see it when you hit the stream, you won’t know whether to go upstream or downstream to look for it. However, if you deliberately aim a little upstream of the boulder, if you don’t see it when you hit the stream you will know to turn downstream to look for it.

If the control isn’t on or near a handrail or other large, distinct, easily identifiable feature, choose an ATTACK POINT that you are confident that you can identify and take a compass bearing from there. Some controls, especially on advanced courses, are placed in the middle of large areas of bland, nebulous terrain, with no trails, streams, reentrants, or other distinct feature to help you keep track of where you are. An example would be a man-made pit in the middle of a flat flood plain, or a boulder on a smooth, even hillside. You have no choice but to follow a compass bearing to find it. But remember that when following a compass bearing, 1) the bearing is only good if you really are where you think you are when you start following the bearing, and 2) your accuracy in following the bearing descreases as the distance you travel increases. So pick the closest feature that you are sure you can find, and go in from there. Note: using an attack point is also useful in less challenging situations, where you don’t have to use a compass. In many cases you may be able to use some other directional scheme, like “straight downhill from the trail intersection” or “up the left reentrant from the reentrant junction” or “clockwise around the marshy area from where the stream comes in”.

Use COLLECTING FEATURES to keep track of where you are. The most successful orienteers know exactly where they are at all times. They do this by constantly identifying features as they pass them, and locating them on the map (or “collecting” the features). Here are two types of situations where using collecting features is particularly helpful: 1) The “I’ll just head west until I hit the trail and then turn right” situation. This can be a good strategy, but if the trail has grown indistinct, or is covered with leaves, or is hidden under a fallen tree, you could walk right over it without noticing. Or you might inadverdently veer southwest instead of west, and hit a different trail. By identifying the terrain and features as you go (“There should be a reentrant coming up on my right, and then there’ll be a marshy area off to my left”), you will know when you are coming close to the trail, or when you are starting to drift off your line. 2) The “I have no choice but to follow a compass bearing a long way” situation. Break the long leg up into several shorter sections between identifiable features, even if it means following a zig-zag course. It often is faster to go a slightly longer, zig-zag distance, following several different compass bearings short distances from one distinct feature to another with great accuracy, rather than to go the shorter straight route on a single bearing with your accuracy deteriorating the closer you get to the control.